Woman on her Knees with a Child 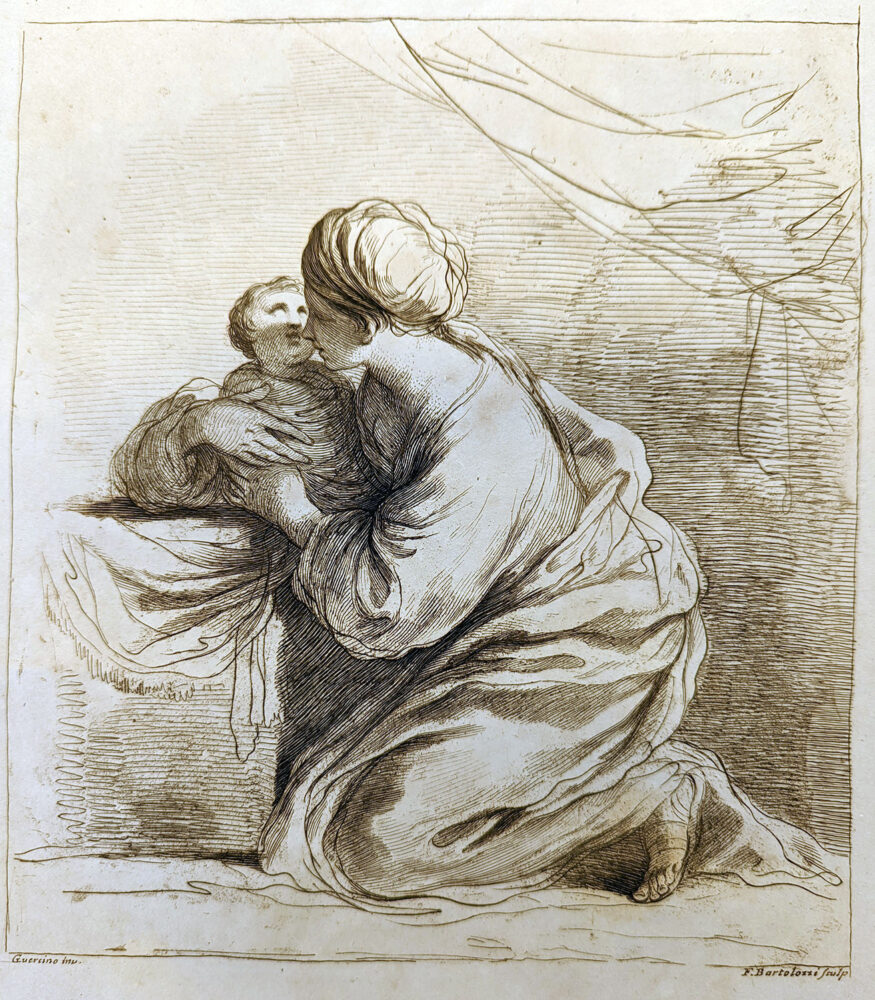 "Woman on her knees with a child" after Giovanni Francesco Barbieri, il Guercino

This is the time of the year to celebrate motherhood! For sale in the gallery or online, a splendid etching, dated 1765, published by John Boydel in 1818 in London. It depicts "Woman on her knees with a child" after Giovanni Francesco Barbieri, il Guercino (1591 - 1666), in exquisitely Baroque style.

The etching was taken from "The original pictures and drawings of various artists in The Collection of His Majesty"., Vol. I tav. 33.

Engraved by Francesco Bartolozzi. The son of a Florentine goldsmith, he learned the first rudiments of the art of copper engraving right in his father's workshop. Attentively studying the works of his predecessors, from the first essays Bartolozzi demonstrates an inclination to devote himself mainly to the work of translating the inventions of others, developing that professionalism and technical ability that will allow him to translate the ideas and styles of other artists. He enrolled in the Accademia del Disegno in Florence at a very young age, where he attended the courses of the painter Ignazio Hugford, with whom he collaborated in the realization of the collection "I Cento Pensieri di Anton Domenico Gabbiani pittore fiorentino".

On this occasion he met the German engraver Joseph Wagner to whose workshop, the most important in Venice, he moved in August 1748 Francesco Bartolozzi remained in Venice for sixteen years, participating in the artistic life and coming into contact with the major publishers and printers, with men of culture, musicians and collectors: these are the years in which he translated into engraving the works of major contemporary artists, including Petro Longhi (‘Il farmacista’, ‘Lezioni di canto’) and Piazzetta.

In 1756 Bartolozzi was in Rome, where he began working for the Calcografia Camerale,, established in 1738 by Pope Clement XII Corsini. Among the Roman commissions are the portraits for "Vite" by Vasari, the series of engravings from the frescoes of Domenichino in Grattaferrata (1756 - 1757), the "Ritratto di Domenico lazzarini". From 1760 he was again in Venice where he began to alternate works and reproductions in collaboration with Wagner and independent engravings, such as the series dedicated to Guercino, to which he dedicated himself almost exclusively between 1761 and 1765.

These are the years in which Bartolozzi became the owner of his own workshop and got married. For the Albrizzi printing house he made the plates for "Studi di pittura" from drawings by G.B. Piazzetta, while from the work of M. Zocchi he engraved the series "Mesi", among the few subjects with views of his repertoire and one of the highest expressions of the Venetian period.

In England, where he stayed for about forty years, Francesco Bartolozzi devoted himself mainly to the activity of translation, alternating with equal success the interpretation of the works of famous painters of the past and that of contemporaries.

In addition to Guercino's drawings from the royal collection, he reproduced drawings by Carracci, Pietro da Cortona, Guido Reni, Carlo Maratta. A member of the Incorporated Society of Artist, in 1768 Bartolozzi was among the founders of the Royal Academy of Arts: engravers were excluded, so the artist was admitted as a painter, thus arousing the envy of some colleagues. In England he met Angelica Kaufmann, to whom he was particularly close. A considerable part of the English activity was dedicated to portraiture (in particular Joshua Reynolds), although the most translated artist is, without a doubt, G.B. Cipriani, friend and companion of the Academy. The last years of his stay in London, Bartolozzi also dedicated himself to the illustrations for Milton's "Paradise Lost", with which he approached historical-literary themes.

In November 1802 Bartolozzi left England and moved to Portugal. Lisbon was, for the now elderly artist, a social goal and the culmination of a long and brilliant career. Rigorous and attentive to details and purity of lines, Bartolozzi concluded his career as director of the Aula de Gravura, where he had the merit of training a large number of students and contributing to the formation of a Portuguese engraving school.

The work is mounted on a museum quality foam board and framed with special anti-reflective and virtually invisible glass (up to 70% UV protection).