Snegurochka, a new adaption of a Russian fairy tale

There are a couple versions, like this one where childless Russian peasants Ivan and Marya made a snow doll, which mysteriously came to life.  Snegurochka grows up quickly. One day a group of girls invite Snegurochka  for a walk in the woods. At some time they make a small fire and take turns leaping over. When Snegurochka turn comes, she starts to jump, but only gets halfway before evaporating into a small cloud.

In another version, she is the daughter of Spring the Beauty and Ded Moroz (The Russian Father Christmas). Snegurochka desperately wants the companionship of mortal humans. She meets and start to like a shepherd named Lel, but as a Snow Maiden her heart is unable to know love. Snegurochka’s mother feels sorry for her and gives her this ability. But disaster strikes when Snegurochka falls in love. Her heart warms and she melts.

This version of the story was made into a play The Snow Maiden by Aleksandr Ostrovsky, with music by Tchaikovsky in 1873. In 1878, the composer Ludwig Minkus and the Balletmaster Marius Petipa staged a ballet adaptation of Snegurochka titled The Daughter of the Snows for the Tsar's Imperial Ballet. The tale was also adapted into an opera by Nikolai Rimsky-Korsakov titled The Snow Maiden: A Spring Fairy Tale (1880–81).

In this new version of André, we encounter in his first painting with a contemporary Snegurochka. Nobody knows where she comes from, but she feels more or less at home somewhere in the vast snow-covered forests far, far away. It is winter and Snegurochka is on her own.

Moving to the next painting we see Snegurochka opening her backpack, apparently looking for something. It is deafeningly silent, only little snowflakes lands quietly on and around her.

When we move on to the next painting Snegurochka has found miraculously a mobile. Now she is able to connect to the world of humans, a world of souls. Her smile says it all, Snegurochka is more than happy. Is she talking to someone, did she made a connection for someone to meet?

In the next painting Snegurochka is waiting, and waiting. Her excitement to meet a real person starts to fade away as the day is coming to an end. What has happened? Did her date get lost somewhere in the forest or the snowy hills? Was the road to long and was it much easier to find a date close to home?

Snegurochka has waited long enough. Her calls seem to be unanswered and she is still on her own. Wandering through the woods she comes across a railtrack. A door to the real world? Snegurochka wants to follow the track, but she hesitates. Maybe she has to wait a bit longer? Looking back one more time, she can only see miles of winter landscape, trees fading in the snow. Still no sound to hear.  Nobody seems to come for Snegurochka. She decides to walk, while fresh snowflakes start to fall again. There is only one way to go…..

Music: Detail of The Snow Maiden: Act I, Lel's First Song "Zemlyanichka-yagodka" by Rimsky-Korsakov, performed by the Bolshoi Theatre 1954. 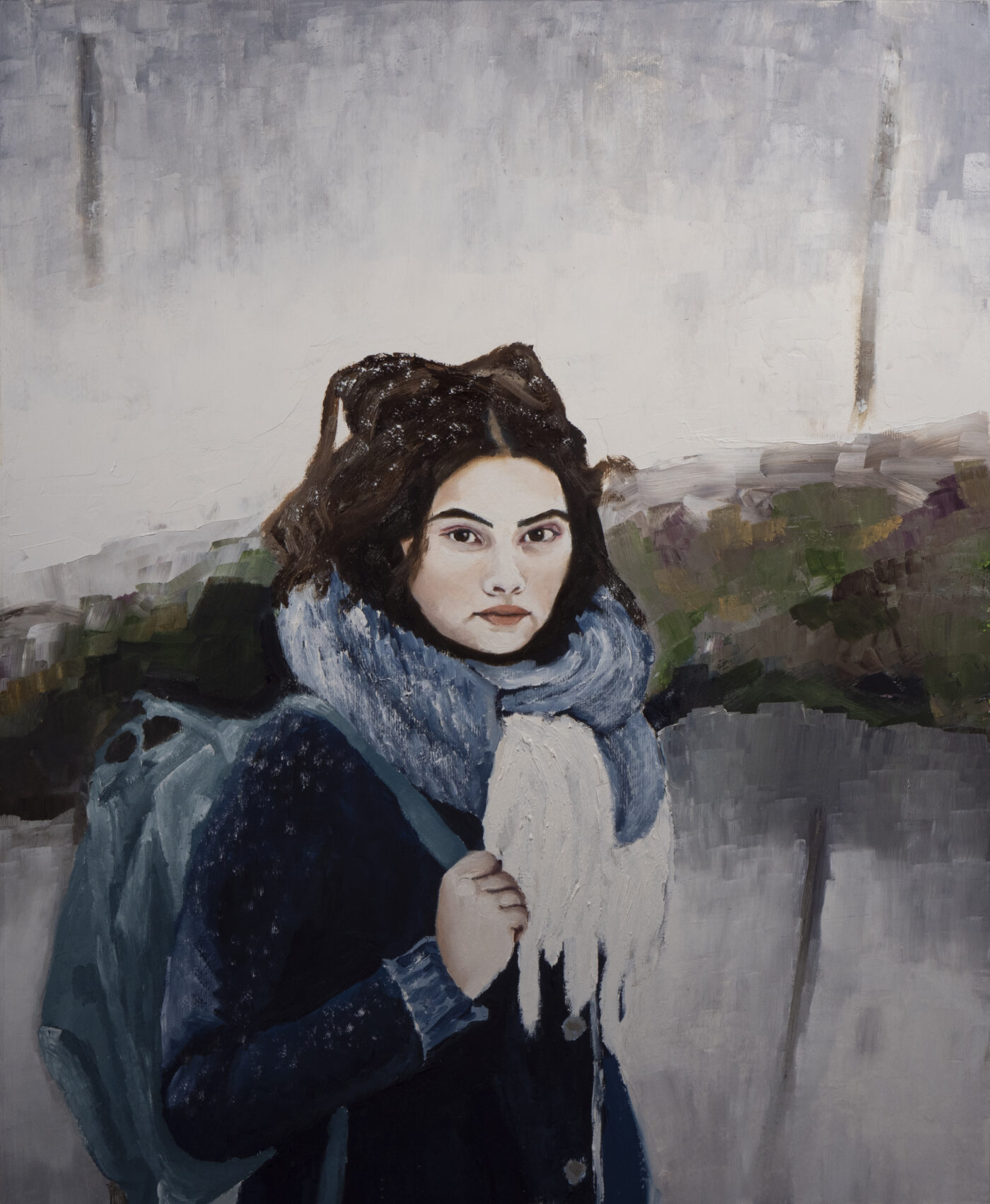 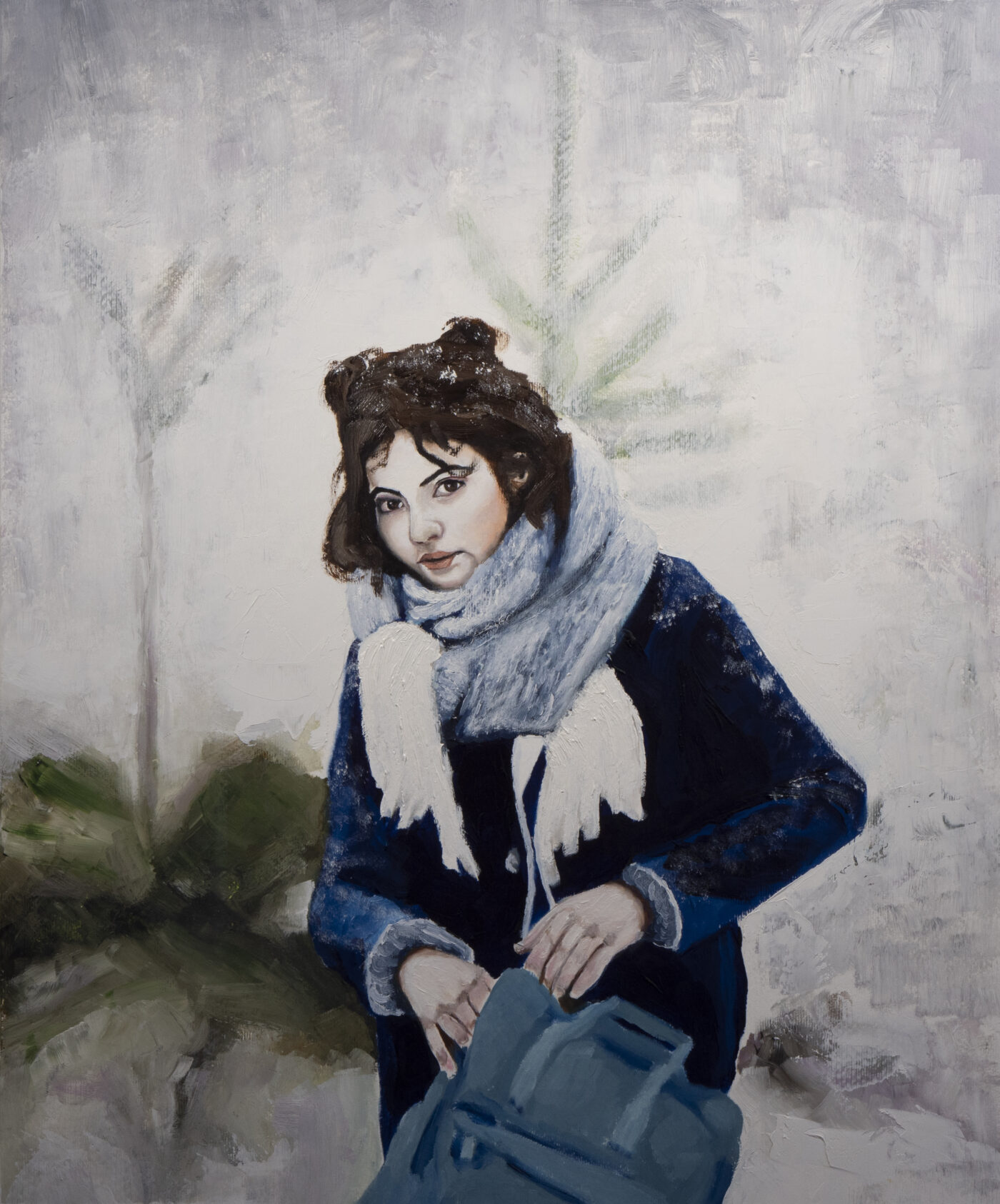 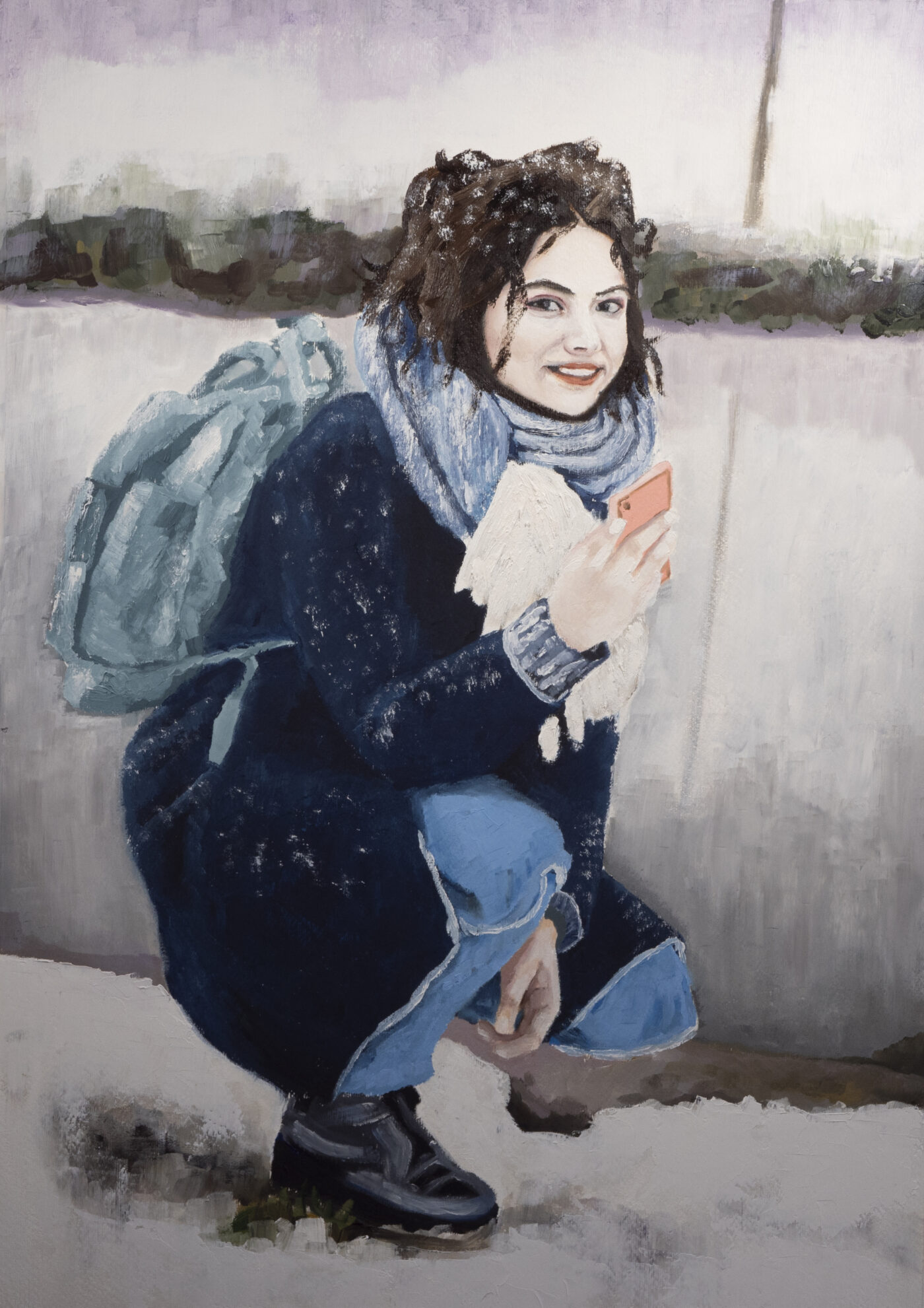 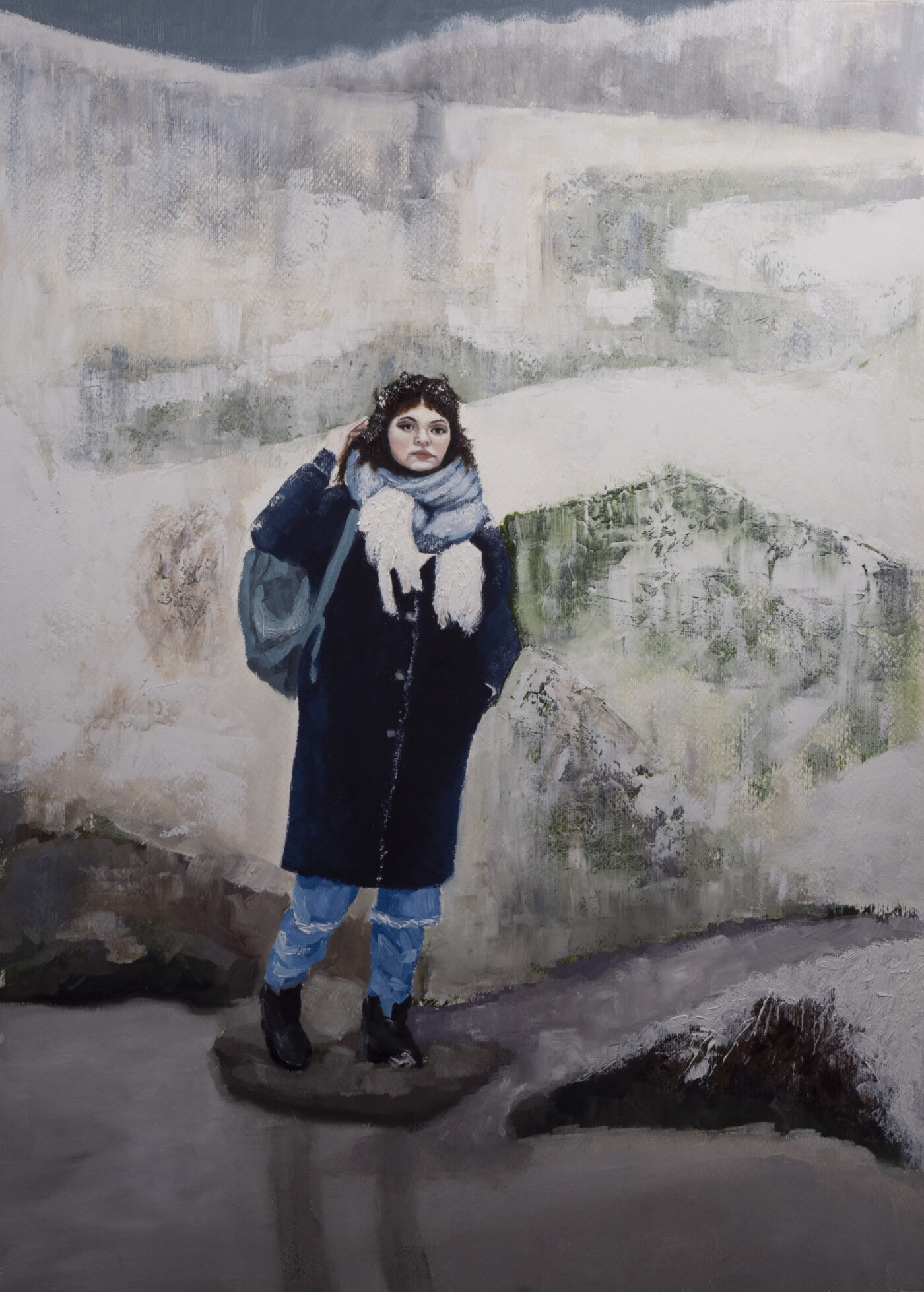 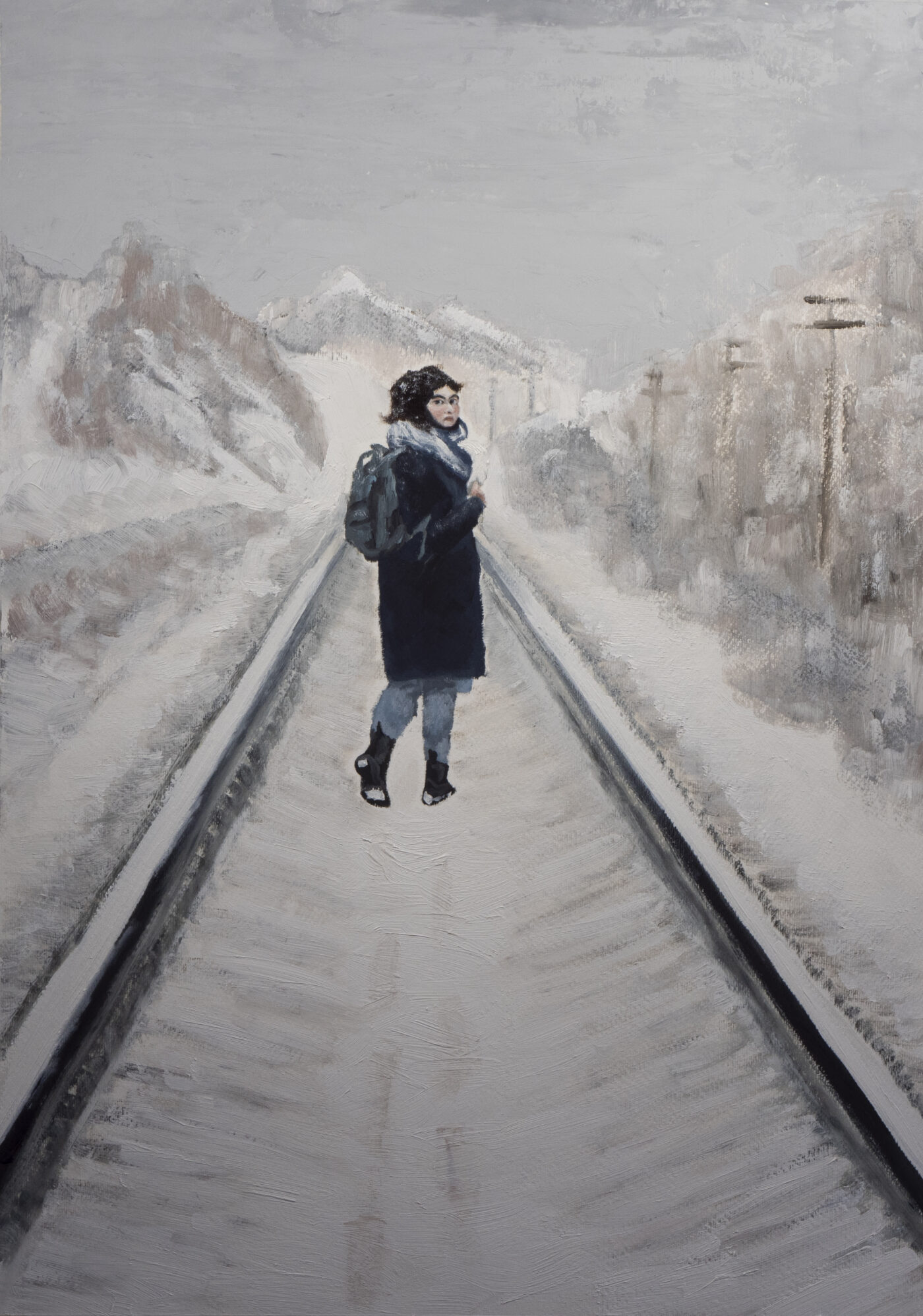