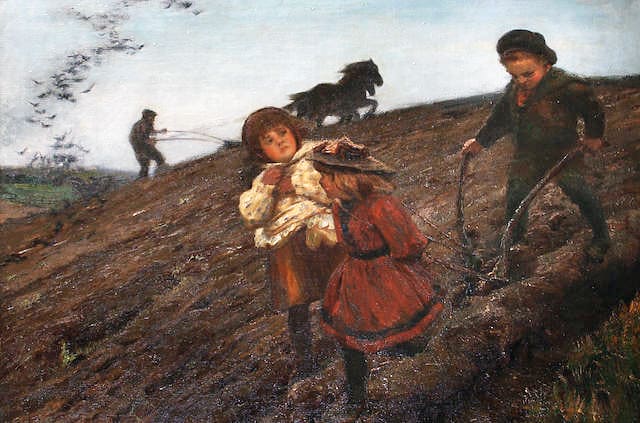 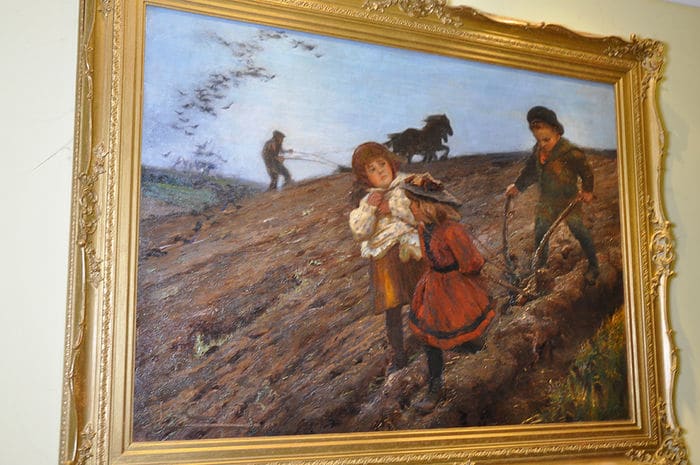 The title of this painting by James Elder Christie, is 'His first furrow'. It might depict young Robert Burns 'helping' his father on the farm of Mount Oliphant.

The farm of Mount Oliphant, on the estate of Doonholm, lies about three miles from Ayr. At Martinmas (11th November) 1765, William Burnes rented Mount Oliphant, and, at Whitsun 1766, moved into it with his family from the 'Auld Clay Biggin' at Alloway. The farm had just over seventy acres at that time, and the rent was to be forty pounds for the first six years, and thereafter, for the remaining six years, forty-five pounds. In order to stock his farm, William Burnes tried, unsuccessfully, to dispose of the lease of his property at Alloway in which his capital was tied up, so his new landlord, Provost William Fergusson of Ayr, by whom he was still employed as a gardener, lent him one hundred pounds.

Gilbert Burns later said that the soil at Mount Oliphant was almost the poorest that he ever knew of in a state of cultivation. Because of this, William. Burnes soon got into difficulties, which were increased by the loss of several of his beasts as a result of accident and disease. The family lived with the utmost economy, and for several years, butcher meat was a rarity on their table. In these difficult times, the family helped in the fields, in the poet's case to such an extent that he overtaxed his strength and probably caused the initial damage to his heart which resulted in his early death. Wrote Gilbert: 'My brother, at the age of thirteen, assisted in threshing the crop of corn, and at fifteen was the principal labourer on the farm, for we had no hired servants male or female. I doubt not, but the hard labour and sorrow of this period of his life, was in a great measure, the cause of that depression of spirits with which Robert was so often afflicted through his whole fife afterwards.'

To add to the family's troubles, their landlord died, on 7th November 1769, according to his tombstone in Ayr Auld kirkyard. The estate then passed into the control of a factor, who, in accordance with his duty, took a sterner line over delays in rent. As Burns put it in his Autobiographical Letter: 'My father's generous Master died; the farm proved a ruinous bargain; and, to clench the curse, we fell into the hands of a Factor who sat for the picture I have drawn of one in my Tale of two dogs. There was a freedom in his [Burnes's] lease in two years more, and to weather these two years, we retrenched expenses. We lived very poorly....

A Novel-Writer might perhaps have viewed these scenes with some satisfaction. But so did not I: my indignation yet boils at the recollection of the scoundrel tyrant's insolent, threatening epistles, which used to get us all in tears.' If, however, the date on Fergusson's tombstone is correct, Burnes not only did not take advantage of the break in the lease, which occurred in November 1771, but must have endured the factor's 'snash' for almost eight years after Provost Fergusson's death.

In the Autobiographical Letter, however, Burns also related that it was while working at a Mount Oliphant harvest that he fell in love with his first girl — Nellie Kilpatrick - and wrote for her his first song, 'O once I loved a bonnie lass'. He went on: 'My father struggled on till he reached the freedom in his lease, when he entered on a larger farm about ten miles farther in the country.' The larger farm was Lochlea, and the move was made at Whitsun 1777 (Source)

The Paisley Museum holds the largest single collection of works by artist and Burns enthusiast James Elder Christie (1847-1914) including an oil painting of a scene from Tam O’Shanter and many illustrations of his poetry.

Christie was passionate about Burns and associated with both the London and Paisley Burns Clubs throughout his life. He was born in Fife and went to art school in Paisley and the Royal Academy of Arts, London. He set up a photographic business in Paisley called Christie and Adam, and although he spent most of his working life in London he regularly came back to Paisley and was in attendance at the revival of the Paisley Burns Club in 1875. He was gregarious and moved in elite art circles, a founding member of Chelsea Arts Club and a member of the New English Art Club. He also founded the Paisley-Renfrewshire Society in London which was a celebration of all things Paisley (and by extension, of Scottish national heroes). Christie was by all accounts hugely passionate about the work of Robert Burns, and his recitals of Tam O’Shanter and the Address to a Haggis were reported as sublime and astounding by other members attending.