International Contemporary Art Exhibition organised by M.A.D.S. a contemporary art gallery, located in Milan, Italy. Set up with screens, aimed to create a continuous multimedia exhibition with the use of new video system projection technologies. M.A.D.S. created the first fully and permanent digital multimedia gallery for artists, revolutionizing the process of presentation of the artworks, which results into the increasing of the visual quality of the details, their three-dimensionality and materiality through high definition and augmented reality.

The International Contemporary Exhibition “GAIA” takes place  from March 26, 2021 and will last until April 4th, 2021. Artist all over the world are participating into this event, including André Romijn with three artworks.

For the third time at M.A.D.S. Milano Art Gallery, the artist André Romijn presents three of his female portraits: ‘Persephone’; ‘Hestia’ and ‘Gaia’. Each of them, with an important title that recalls to mind the ancient and mythological goddesses. Concerning the concept of the exhibition - that refers to Gaia, Mother Earth - with his artworks André Romijn perfectly gives us his interpretation of Gaia and all the legends that surround this goddess figure.

The ‘Gaia’ of the artist, depicted with oil and cold wax on multi-panel wood, represents here a posed figure with her head proudly held high. With the eyelid going down, the gaze of the goddess seems to be absorbed in some thoughts, or it can be  explained as a sort of concentration in bringing under control the natural elements that compose the background of the painting: the sky and the ocean. André Romijn’s interpretation of Gaia, is of a tamed woman with delicate features that make Mother Earth a sensual and elegant figure. However, what immediately stands out is the big, purple cloth that is stylishly worn by Gaia. With this particular, carefully depicted in its details, the artist is able to confer a material perception that contrasts with the slender neck of the goddess. Such a strong stiffness that permits her to support the importance of her role.

In Greek mythology the link between goddesses and nature was of great importance. Persephone too, Proserpine in Latin, in ancient mythology was the all-pervading goddess able to give birth and destroy, at the same time, nature. Differently from the representation of Gaia, here the ’Persephone‘ of the artist André Romijn, is closed in features with a common woman. The great use of the light, given by the oil and cold wax technique, confers on the figure, noble features with pale skin and red, long hair. This time, by looking at the portrait, we can notice a sort of melancholy in the gaze’s expression, that is emphasized by the sad chubby mouth. These particulars that describe the woman, giving to her a more human personality, allude to the version of the myth that sees in Persephone the personification of the fertility of vegetation and the symbol of immortality.

Under a more divine light André Romijn paints ’Hestia‘ the virgin goddess of the heart. Recalling to mind the upright posture of Gaia, depicted by the artist, here the female figure stands in front of the viewer without looking away. Observing at the figure, what immediately stands out is the golden halo taken from the byzantine depiction of Christian saints, that assumes a deep meaning and that can be read as a sort of admonishment: ”The ancient Gods are still around us!”, as the artist says. This time, André Romijn – the artist – focuses his attention especially on the objects and the elements that adorn Hestia and that emphasize the woman’s details. Apart from the gold halo, the heavy scarf that covers the neck of Hestia, intensifies her body, and her slender but elegant chest.

Thanks to the artist’s ability in playing with colours and their lights, the viewer can analyse the figures and engage with them; to read their emotions and to interpret them. 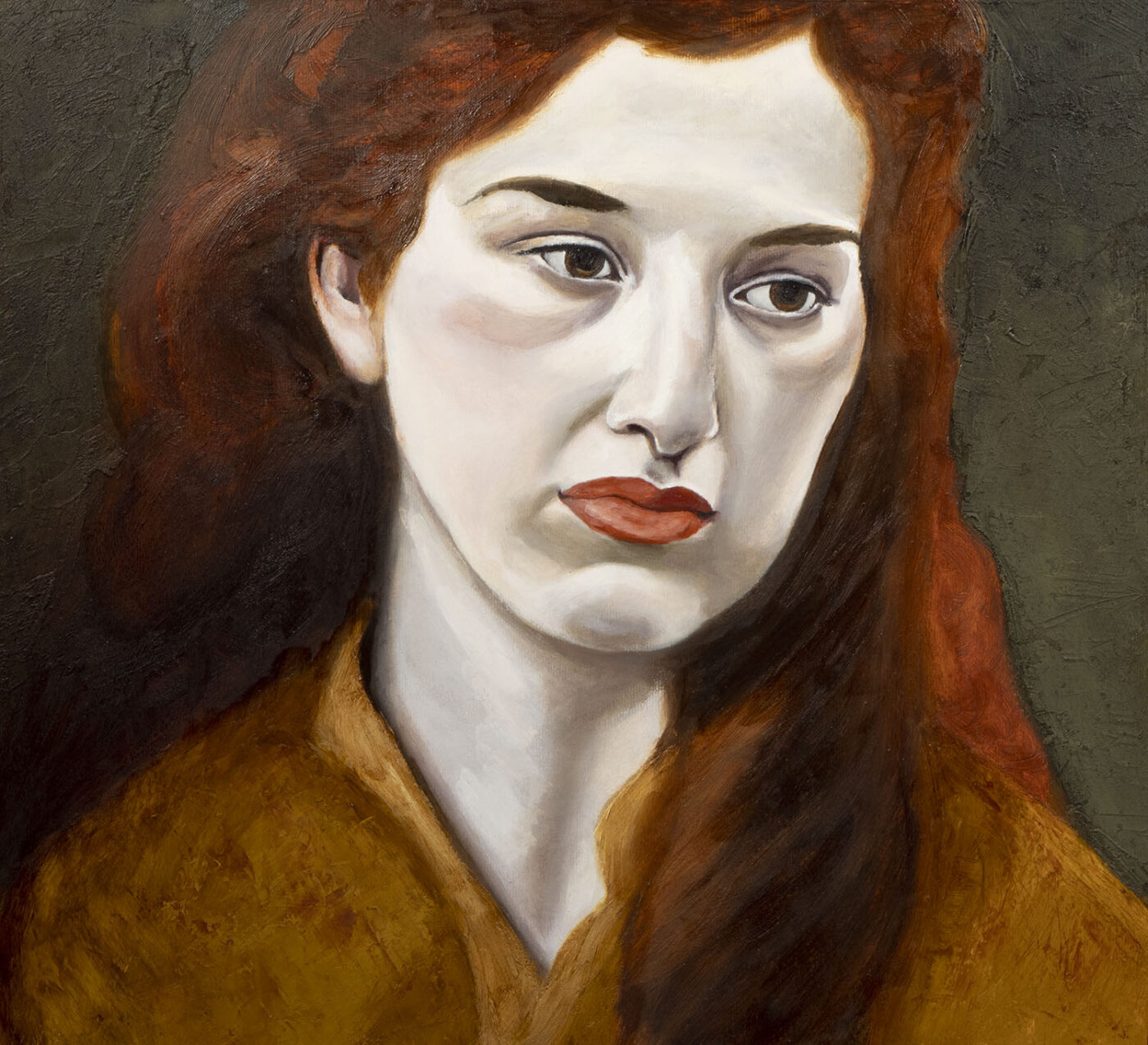 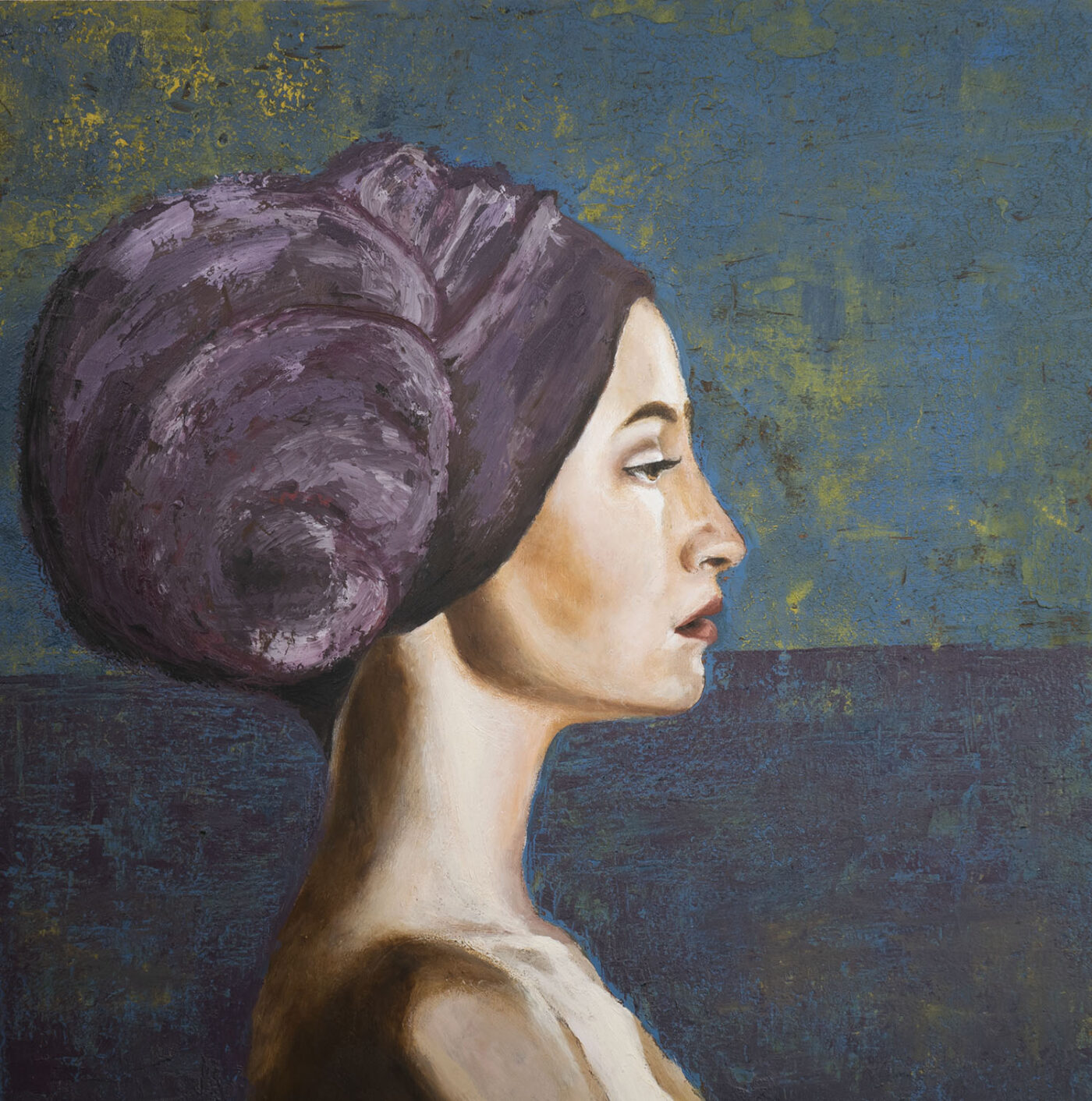 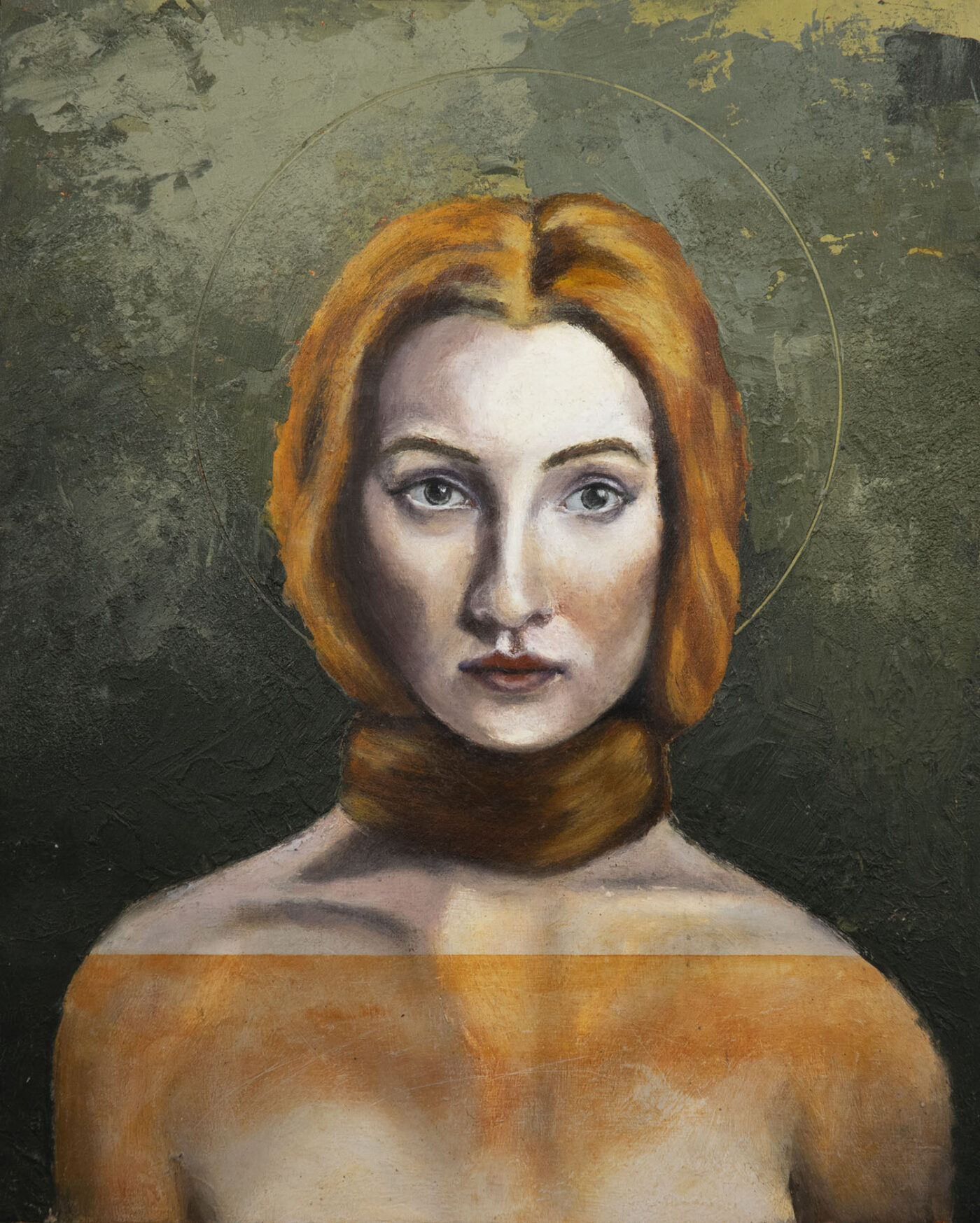